Although, there is a difference of only 1mm but it really creates a difference when someone uses 12mm or a 13mm cue tip. A smaller tip can help you achieve what would be difficult with a 13mm for an intermediate player. For a beginner, a 13mm cue tip would help make the game easier and simpler than a 12mm cue tip size.

12mm cue tip size is a level up cue tip sie, it will give more control over the Englishes but require more practice.

The bigger the cue tip is the easier it will be to hit the intended spot on the cue ball. So if you are planning to hit the ball right at the center then even if you are a beginner player then the probability that a part of the tip will hit the aimed part is higher.

Because as a beginner the intention is to play the game straight as control and understanding of the english is lower that is why the 13mm cue tip would be more friendly.

Alternatively, if you are someone who has spent some months with a 13mm cue tip and now want to experiment with the side spins then you will find it difficult to impart side spin on the cue ball because as the size is bigger, there would be some part of the cue tip hitting towards the center, hence you will impart some unintended linear force onto the cue ball as well.

Smaller in comparison with the 13mm cue tip size and offers more opportunity to completely hit the aimed spot at the cue ball. As the size of the tip is smaller the more focused the energy becomes at the end of the cue stick. Therefore, if you have an understanding of the Englishes and how much spin is imparted on the cue ball on certain spots then a 12mm cue tip will be the better option.

As a beginner, you should not go for 13mm size given that you can only choose between a 12mm and a 13mm then you should go for 13mm size. Because of the smaller size, there is more chance that you will hit the neighboring area of the aimed spot on the cue ball. As a result, the 12mm cue tip is less forgiving than a 13mm cue tip.

Look at the picture below, the smaller the tip size is the more control you will have on the cue ball but you must be a good player. The bigger the tip size is the more forgiving is the cue stick. A bigger cue tip would be playable for both beginner and expert player but an expert player may not enjoy the game because such players plan where to land the cue ball after the shot and a smaller cue tip helps in achieving that.

The forgiving nature of a cue ball is not only just dependant on the cue tip there are more factors such as weight of pool cue, type of pool cue, deflection type, how you hold a pool cue, how you maintain a pool cue and many others. 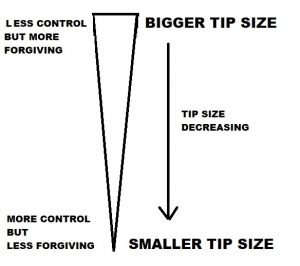