By Asad | Published 1 year ago

Struggling with the draw shot? Wondering what you could be doing wrong? Suddenly you have realized that it’s the cue tip that is frustrating you. This post answers the question what is the best cue tip for draw shot with your favorite pool cue.

The short answer is, there is no tip whether soft, medium or hard that can be more effective for the draw shot. From the physics point of view, they are all equal. It is rather the technique and practice that makes one player play draw shot better than the other one.

Let’s examine this from a scientific point of view so you can get this concept clear in your mind. 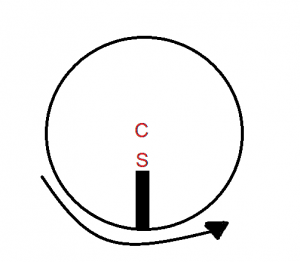 WHAT IS THE RULE OF IMPARTING SPIN?

This is how spin is generated on to the ball. The same applies to the draw shot as well in which the force of direction is below the center of the ball.  The more the spin on the ball the more distance it should travel back provided that there is enough energy transferred onto the cue ball.

HOW TO INCREASE THE SPIN ON DRAW SHOT

There are two ways to increase the spin. One of them is to hit the ball below the center line and other is to hit it fast.

When we say hit it fast does it mean to hit the ball with accelerating cue? Uniform velocity cue or with a decelerating cue.

If you are able to hit the ball with an accelerating cue then you would be able to hit it with the more peak power and hence it will be able to generate a lot of back pin. But from experimental data its been recorded repeatedly that no matter how good a player is, at the point of contact the cue is decelerating. So there is a limit to the amount of effective angular momentum or spin that can be imparted on to the cue ball.

Therefore, the best way to impart maximum spin is to hit the ball as far as down possible and with a maximum force so that the linear momentum is at a minimum and angular momentum is at maximum but that is pretty hard to do even for the professionals. The arm physiology varies from person to person, some are naturally gifted with muscles twitching with right timing that makes them master this shot quicker than the other. For those like me, persistent training is the key to success.

WHAT ABOUT SOFT TIP THAT HAS MORE CONTACT TIME?

It’s been commonly believed and even I also used to believe that because the soft tip has more contact time with the cue ball hence it is able to transfer more spin or angular momentum on to the ball. The reality is, yes it is true that soft tip contact time is longer than that of a harder tip but that duration is not more than .0005 seconds. That is a difference of half a millisecond. A millisecond is one-thousandth part of a second.

High-speed cameras show that as soon as the cue hits the cue ball with soft or hard tip the ball begins to rotate after the tip has finished its contact with the cue ball. If the ball began rotation with the contact with soft tip was still happening then it would be strong evidence that more contact time increase spin but that is not the case. Cue balls spin after the tips have stopped the contact.

Another interesting observation is that, although the softer tip stays in contact for a longer time and the amount of power transferred onto the ball is still the same as it would do with a harder tip that remains in contact for a shorter time. Because according to the law of conservation of momentum, given that the same player is playing the shot with same force for a softer tip the transfer of energy remains same although the contact time is longer for the softer tip shot.

There is no best cue tip for draw shot. The real answer is the practice with right technique makes the draw shot better. As for the tip, the way how the tip feels or gives feedback imparts confidence to the player onto his game. The laws of physics are simple when it comes to angular momentum. If you can practice to play the shot with higher speed and with more below center offset you will play draw shot better.

Head Of Samsung Gets Away With Serious Crime?

Is Dark Chocolate As Healthy As You Think It Is?

Why So Many Retirees Are Suddenly Working In Travel

The Insane Amount Of Money Walgreens Is Paying Its Pharmacists

Why Facebook Lost A Massive Amount Of Money For The First Time Ever
Twitter Employees Poised To Leave The Company In Droves?
The Insanely Weird Museum You Never Knew Existed
Martha Stewart Wants To Deliver Dessert To Your House?