Pizza is downright delicious, and that sentiment is something we cling to very strongly in the United States. The US is home to over 74,000 pizzerias that we spend a collective $38.5 billion at each year, one would say we are a little bit obsessed with the cheese, tomato, and dough trifecta.

Despite our unwavering affinity for Pizza, the United States is actually one of the more recent societies to add pizza to its repertoire of cuisines. That’s not to say we haven’t made the divine semblance of dough, sauce, and cheese our own, but Pizza, believe it or not, actually has ancient roots. So, where did Pizza really first originate? When and how did it get to the United States? And what are the top varieties that we enjoy here in the US today? We did an all-out deep dive into Pizza’s indulgent history to find the very answers to those questions.

The first mentions of pizza can actually be traced back to the ancient Egyptians, Romans, and Greeks. The ancient Greeks, in particular, often spoke of putting a combination of herbs and oil on a popular focaccia-like bread of the time. There are even mentions of a pizza-like food in Virgil’s Aeneid. The epic talks of Aeneas enjoying “thin wheaten cakes” that were topped with mushrooms and herbs.

However, modern-day Pizza, which will likely not come as surprise, has its origins rooted in Italy. It was first made in Naples in the 1700s, which ironically was initially a Greek settlement back when it was first founded in 600 B.C. Neapolitan pizza was first invented out of a need for its Lazzaroni, or working-class poor, to have something to eat that they could both afford and consume quickly so they could get back to work.

Nearly two hundred years later in 1889 after Italy had been unified for well over two decades, the country’s King Umberto I and Queen Margherita went on holiday to Naples. It was during that time that a famous pizzeria in the region called Pizzeria Brandi made an assortment of different style pizzas for the king and queen to try. Queen Margherita found the combination of soft white cheese, fresh tomatoes, and basil particularly delectable. Her love of the specific trifecta is was led to it ultimately being christened the Margherita.

When diving into the history of pizza in the United States, you have to begin with New York City. Pizza got its start smack dab in the heart of the Big Apple in the late 1800s. The latter half of the 1800s saw a wave of Italian immigrants making their way to Ellis Island to start life anew in the concrete jungle (actually it was more of a cobblestone jungle back then). A large portion of the Italians who immigrated to NYC at that time were from the region of Napoli. At home in Italy, Neapolitans would frequently dine on bread slathered with tomato sauce that was sprinkled with a topping. Two common toppings were anchovies and garlic. When they arrived in New York City the Neapolitans continued to make their tasty tomato pies both as a reminder of home and because the ingredients were relatively inexpensive.

Pizza wouldn’t really become a global phenomenon until sometime in the 1940s, thanks to a surge of Italian immigrants making their way to and settling on the northeastern seaboard of the United States, it got its start in America beginning in the early 1900s. Pizza thrived within the pockets of Italian communities in the city and in 1905 the very first pizzeria, Lombardi’s, opened on Spring Street in present-day Little Italy. Inspired by the success of Lombardi’s, other pizzerias began to slowly pop up within the city’s five boroughs, eventually expanding further out into the surrounding northeastern states. Throughout the 1910s, 1920s, and 1930s pizzerias began to dot New Jersey, Connecticut, Pennsylvania, and Massachusetts, each one beginning to put its own flair and twist on the pies they were serving up. These early pizzerias were the very precursors to what would evolve into regional pizza varieties.

Despite the steady growth of pizza and the pizzerias serving it in the first decades of the 20th century, it largely remained a regional phenomenon secluded to the US’s northeastern quadrant and was still mostly popular with southern Italian immigrants. However, the looming threat of the second world war would serve as the catalyst that would turn the tides for the history of pizza in the United States.

Wars, for better or worse, are huge proponents for enacting change. From sweeping technological advances to exposures to different cultures, like a phoenix, seeds of knowledge arise from brutal struggle. As was the case for the history of pizza in the United States. WWII is what truly sent America’s love affair for pizza pie soaring towards the stratosphere. This is because, as fate would have it, a good portion of the British and American allied forces happened to be stationed in none other than Naples, Italy.

This stroke of destiny allowed many soldiers to develop quite a taste for the local cuisine while overseas and when they returned home they bought that newly acquired affinity with them. The return of the vast majority of soldiers with their newfound love for pizza combined with a period of prolonged postwar prosperity and widespread industrialization were the ingredients that sealed America’s pizza-loving fate.  The latter half of the 1940s and throughout the 1950s and 1960s were pivotal decades in the history of pizza in the United States where the doughy cheesy slices of bliss saw rapid growth nationwide.

A VARIETY FOR EVERYONE

With growth, more often than not comes evolution. When looking at the history of pizza in the United States, this is exactly what happened. With more and more people being exposed and growing accustomed to pizza many began to apply their own personal taste preferences to the creation of their pies. People playing around with the ways in which they crafted their pizzas is what birthed the famed regional varieties of today. The most well-known styles include New York, Chicago, St. Louis, Detroit, and California. And there’s even the brick pizza oven which have become quite popular.

New York-style pizza is what many think of (at least in the northeast) as the quintessential pie. It is characterized by a semi-thin foldable crust, a generous helping of tomato sauce, topped off with an even coating of mozzarella cheese. Walk into any pizzeria in New York City (or New Jersey) and you are guaranteed to be served a version of this pie. If you’ve never had New York-style pizza you are truly missing out. Oh, and as a word of advice never tell a New Yorker that another style of pizza is superior to theirs.

Chicago is famous for its deep-dish pie which is characterized by its super-thick and fluffy crust with raised edges. It is assembled in the reverse of the traditional New York-style starting with the cheese on the bottom, fillings in the middle, and ending with the tomato sauce on top. The popular pizzeria chain Uno was inspired by this type of pie.

St. Louis’ pizza is made with a super-thin, flakey crust that is usually assembled into rectangles and then cut into squares or what St. Louis natives refer to as the “tavern cut.” The crust is akin to that of a cracker which is known for being able to sustain the weight of the various toppings St. Louis pizza is known for. This makes for a heavenly combination when paired with this style’s signature three-cheese blend of cheddar, Swiss, and provolone.

Detroit-style pizza’s heritage hails back to its auto-making roots as it was first made using square pans that were frequently used to house various car parts. Detroit style, like Chicago, is another upside-down variety. However, they put their toppings at the very bottom (usually pepperoni), followed by the cheese which extends all the way to the perimeter of the pan, and then a large ladleful of tomato sauce right in the center.

The history of pizza in the United States is one greatly rooted in the immigrants that this country was built upon. And it was furthered by the propensity for people to take a great thing and make it their own. Today pizza is more revered and more widespread than ever. Not only can you grab a slice at your local pizza joint, you can also find the satisfaction in making your own homemade pizza dough!

Not in the mood to order out but still in the mood for a quality pie? There’s a solution for that, too! Frozen pizza brands like Screamin’ Sicilian, Freschetta, Red Baron, and DiGiorno’s have built strong reputations upon their delicious pies that are ready to be heated and devoured.

From its earliest roots to its modern-day varieties, Pizza unmistakably and unquestioningly proves that life’s simplest pleasures truly are among the absolute best. So, now that your stomach is growling and your mouth is watering, open up that DoorDash app or dial up your local Pizza joint to reward your tastebuds with the tantalizing combination.

The Best Toys For Creative Play
Taco Bell Just Added A Popular New Taco To Their Menu
Krispy Kreme Ditching Donuts For Ice Cream?
Telltale Signs You Aren't Getting The Sleep You Need 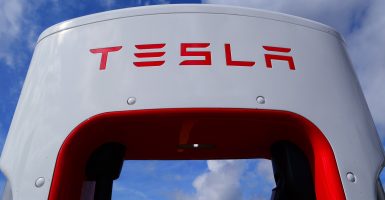 Why Tesla Employees Don’t Have Enough Desks To Work At 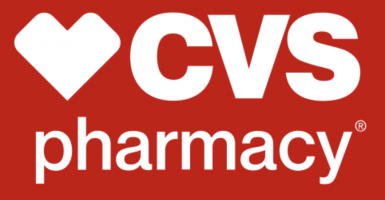 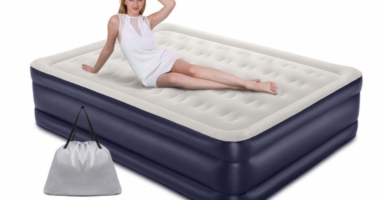 Why Gas Stations Are Suddenly Charging Over $150 Upfront For Fuel

Self-Driving Robot Boats Have Set Sail
Bitcoin Mining Is Being Banned All Over The World
Peloton Cutting Almost 3,000 Jobs And CEO Stepping Down
Beekeepers Are Using Tracking Devices To Curb Bee Theft